The app is about being able to play audios. Each audio has two versions, a long version and a short version. I don’t know if it’s possible but…

Does anyone know how to make this happen?

When they perform the action to play the long version, also update a property within the user called “Played Long” (or something) and set it to true.

So you only show the short version is “Played Long” for that user is true.

Ok, let me give that a try. It will be my first time using that type of logic so we’ll see if I can make it work. I’ll let you know…and thanks

How do I tie the two versions (long/short) together so that the logic knows which video to display?

I don’t understand what you are saying.

Otherwise, if “Played Long” is not true, the user will not see the short version.

So, there is a Long Version and a Short Version in the database. They have the same title but they are separate and not connected, correct?

What am I missing?

You are missing the fact that I never said that the property “Played Long” is a property linked to the track.

It’s a property linked to the user listening to the tracks.

Under the user collection, create a property called “Played Long”. It’s a boolean property and now review the guides I provided earlier again.

Oh, I can see that you said “user property” about 6 times! Sorry I missed it. I’ll give it a try.

How do I set a visibility condition for the short version?

Have you checked Adalo’s documentation?

They have an article for that.

Yes, I’ve changed visibility for other things but never within a list. The only visibility option I see is for the list, not for the video’s within the list. I’m probably missing something again, this is my first app so there is a lot that I don’t know. 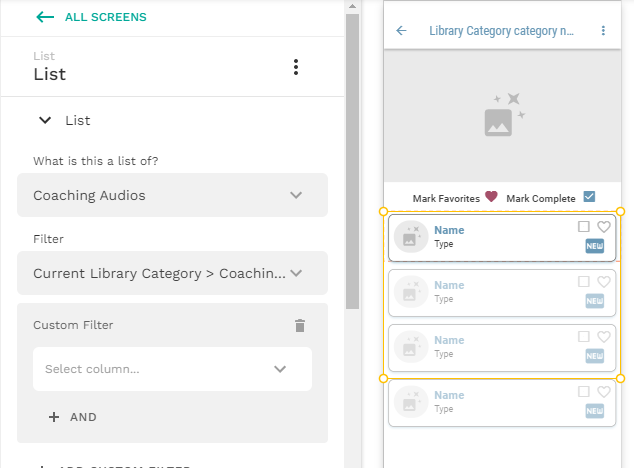 You have to double-click on the list to reach each component.

On that same view, on the left bar, scroll down until you see components. Then you will be able to select each component, applying the visibility condition to the corresponding one.

OK, I’m getting there!