From Template To App Stores in 2 Weeks

I’m excited to share the story of the Brion James Music app and how we were able to get his new music app in the app stores in just two weeks. 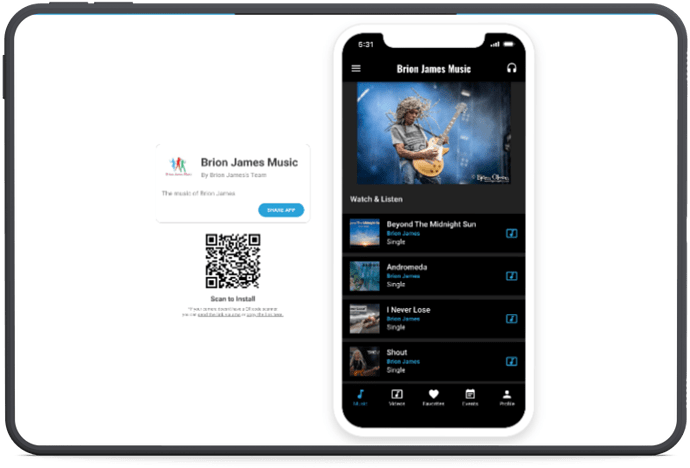 Brion James is a music artist from New York and he wanted to reach a wider audience by launching his own mobile app. He ran across our custom Adalo templates and liked the designs, so he decided to use one for his app.

Brion started his journey with us by purchasing the “Record Label” template in our Templar Design Template Marketplace. He then customized it to fit his brand, adding his own color palette, logos, and images. Brion also added all of his songs, music videos, and events to the app.

That’s when Brion decided that he needed some direct help.

First, he decided that he did not want to have a merch shop as a part of the app and wanted to replace the shop with a “favorites” player. Brion hired us for a mentoring session to walk him through how to remove the shop and create the functionality where users can favorite songs and listen to them with a continuous favorite audio player.

Next, Brion wanted to monetize the app by adding a digital in-app purchase that unlocks access to the app once a user purchases the product. Over the 2nd mentoring session, we helped set up the in-app purchase products within Google Play and the Apple App store.

Then, once he was happy with the app, Brion wanted to get the app submitted to Google Play and the Apple App store. Since he’s never been through the submission process, he booked another mentoring session with us to walk him through the entire process.

Now, Brion has his own fully-functional music app live on both Android and iOS devices for all to enjoy!

Brion purchased our Record Label template on December 16th and the app was approved by Google and Apple on December 30th.

We were happy to help Brion on his journey and are so proud of him for taking the leap to launch his own app. We can’t wait to see what other successes he has in the future! If you’re looking to take your music career or any business venture to the next level, we highly recommend checking out our custom Adalo templates as a great starting point.