Issue Creating and Updating a Record With The Same Button

Hey everyone! I have something that I keep running into issues with in Adalo.

I’ve created several iterations of this, but I consistently ran into problems since Adalo doesn’t execute actions sequentially.

My last iteration involved setting a user variable that only allowed clock ins and clock outs to happen if the variable was the correct value, and a countdown timer was used to set the correct value after each clock-in/clock-out.

Despite that, I’m not able to update the same record from the same button at all. And unless I’m missing something, I haven’t found a way to update that record from a separate button either.

If anyone has recommendations, I’d very much appreciate it.

Hello,
This sounds similar to few cases I am facing as well, try to switch off the “Instant Navigation” since it was causing issues for me on multiple actions

Where exactly do I switch off Instant Navigation?

Also, this button doesn’t change screens. It’s a single button on one screen. 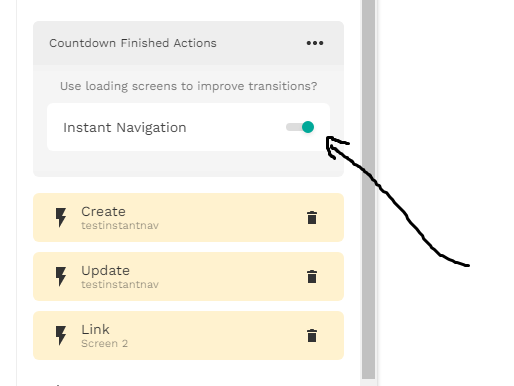 but since no navigation happening on this button, then this is not the same case I am facing, and you wont see the instant navigation switch unless the button is going to another screen

Ah, yeah, for sure. This works a bit differently, but that’s still good to know, thank you.