Custom Lists on Android are slow

What is it with custom lists and Android builds? I just created a new custom list as it is the only way to incorporate a rating icon (or star rating) to show average ratings on our listings. My list only has 30-40 items. On iOS, app works just fine and the custom list loads smoothly and quickly. On Android, its a totally different story. Half of the list images load, others do not. But scrolling up/down the list is unbelievably glitchy! The app feels so slow on Android, no customer would agree to put their CC details and pay on an app this slow.

I read several other posts in the forum and tried all suggested solutions. No improvement. It just seems to me at this point that there is something wrong with Custom Lists and Android builds.

I wanted to know if anyone here faced similar issues and actually managed to solve it?

Hello, yes the custom lists are slow in android, especially if the collection has +20 items. I think that rhe only solution is to replace it by a card list and it will work perfectly.

Thanks Ali,
Yes it seems there is no way around for this. Using custom lists on Android simply won’t be possible until Adalo fix it.

The issue is not with custom list, anything will be slower in general on Android for many reason, I had a nightmare with Android phones on my app earlier, but managed to solve most issues and now my app is running on 3-4 years old android phones, still much slower than IOS but acceptable

What I did is mainly getting rid of any long list by keeping them in categories to reduce the load, and a major change is in images since you mentioned that, you need to compress and reduce images size while displaying them on the app, you should not load large images

Many other posts highlighting the same issue. I submitted a ticket to Adalo recently and they are actually looking into it.

Thank you all, let us know please, in Europe that’s a problem cause for example in Italy only 20% have IOS/Apple devices.

Just wanted to let you know that I have found the root cause to why my custom lists had slow performance on Android devices. It was related to the Image Component within the custom list.

I solved this by trial and error, tried many options till I got to this

Solution:
Utilize IMGIX url parameters to set the height and width of the image (snapshot below)
So it’s the imageurl followed by “?auto=compress&w=500&h=750”

You see, this image component does not give you an option to choose Landscape, Portrait or Square layout as opposed to the standard Card List offered by Adalo which allows you to choose those options. Most likely once you choose one of them, it locks the aspect ratio and auto compresses the image to deliver the best result.

Adalo can just add that as an improvement to the Image Component itself, and from there many custom list problems would be fixed 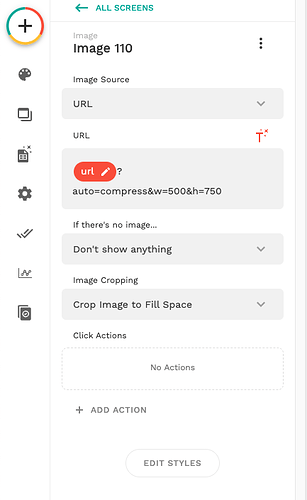 good to hear that, actually I have mentioned that you need to optimize the images in my post above but you said that you have done that already!
the URL with compression parameter is what I meant
no one should show the images as is in the app, always should be resized/compressed

good luck with your app

major change is in images since you mentioned that, you need to compress and reduce images size while displaying them on the app, you should not load large images

I had optimized the image sizes prior to upload by limiting them to 50kb each. But didn’t use IMGIX back then.

Thanks tor your tips