Hello guys, anyone knows if in the NEW pricing plans the term “published apps” refers to just apps on the app store or to Web Apps to?
In my case this is very bad because i have 5 fuctional apps and pass 30K actions per month so i will pass from 45$ a month to 160$ at least Plus Zapier increasing plans to. 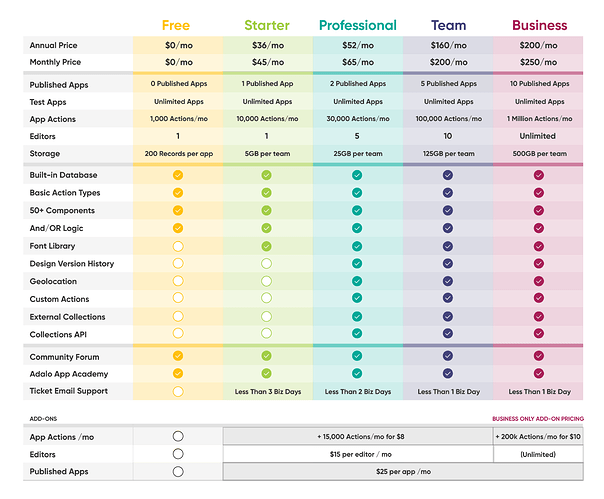 Here’s a great explanation by David!

What counts as a Published App?

In the future when the new pricing is live, there will be a way to mark which of your apps are ‘Published.’ By marking your app as published, you will unlock the ability to publish that app to either of the App Stores (Apple or Google), or by applying a custom domain. Publishing to all of three of those with the same app will only count as one Published App.

If your app shares a database with another app, that will also only count as one Published App.

For makers that are already on a paid plan and have published apps, there will be a way in the future to mark which ones are published.

Quoted from here : Details on the New Pricing Plans

You’re exactly right. You will need the “Team” or “Business” plan to have 5 published apps.

Ok all my 5 apps share the same database but the actions are still much more.

So then you may be better off with a lower plan and paying the additional $8 per 15,000 additional actions.

thanks for your input i will check that